Last night I learned a new word, er, style, uh, process… hell, I don’t know what it is, but I learned about it on Facebook after joining the Austin Street Photography group, posting one image that was a fairly representative example of my idea and style of street photography, then being politely informed by one of the admins that, no, my image did not conform to the group rules.

I posted a link to my Street set on Flickr so he’d understand that my participation in the group would be futile as all of my work has the same outward appearance and definitely wouldn’t be following group rules.

The admin, Patrick, asked if I’d looked up Minimalism or Miksang. Minimalism is kind of how I’d describe my work. Probably not all of it, but there is a hint of minimal in a lot of the images I’ve made. Miksang, on the other hand, seems to sum up my style entirely.

Well, Miksang-like might be a more accurate description of my way of making images. I’m not religious, spiritual, or anywhere near meditative but there is a certain zone or mindset that I get into when I’m waking around with a camera. I intentionally slow down, look around, see, notice. Everything. But from a playful, off-beat, and humorous perspective.

From Wikipedia, Miksang is a “Tibetan word meaning “good eye.” It represents a form of contemplative photography based on the Dharma Art teachings of Chögyam Trungpa, in which the eye is in synchronisation with the contemplative mind. The result of this particular perception of the world, combined with photography, produces a peculiar and open way of seeing the world. Miksang pictures tend to bring the observer back into the original contemplation state of the author of the picture. The pictures can bring one back to a purer perception of reality that is often neglected. Miksang involves nothing fancy, no special setup; only a visual capture, in the proper state of mind, of everyday’s reality.”

Describing my work has always seemed difficult. Now, at least, there’s a word I can use when explaining my personal photographic style. Who knew?

There a lot of internet resources available and a few books on the subject have been published, and naturally, with a little bit of searching you can find plenty of videos to watch about Miksang… 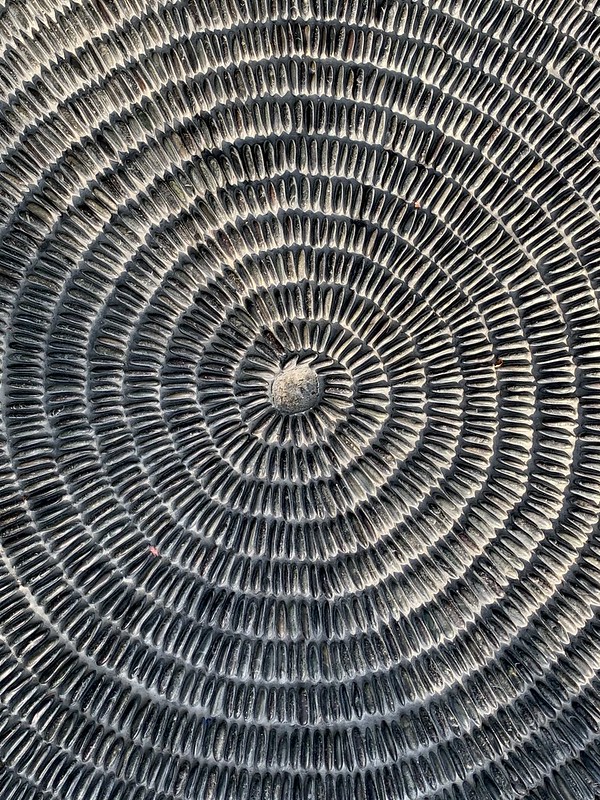 While we were in California for a recent visit I went for a walk around my Father-in-law’s neighborhood with he and my wife. My intent was purely photographic.

I took a lot of pictures of the usual flowers and interesting parts of houses as we walked and noticed that cracks in the streets had been covered, no, painted over with slurry in a most artistic way.

A good 100 yards of these random strokes stretched down the street and I started shooting them from different angles, trying my best to avoid the sun through the trees landing in the viewfinder.

I’m pretty sure the person who provided this service was more interested in covering cracks than creating pleasing art, but I was quite impressed with the work they did.

Imagine if cowboys had to pay to hitch their ponies.

Yesterday was a remarkably busy day for me. I wanted to be part of 2 photographic events in Austin – an early morning PhotowalksATX stroll around Second Street and a Randy Kerr meet-up at Umlauf Gardens, preceded by lunch at Uncle Billy’s with the crew hangin’ out with Randy in the afternoon.

It was a great, but tiring day. The humidity was terrible and temps were in the 90s as the day wore on. I shot TtV at both events and met a lot of new people, saw new stuff downtown, and learned bunches from the entire experience.

The parking gripe? I really don’t like paying to hitch my pony. I’d asked for suggestions about free parking for the morning stroll downtown on G+, but really didn’t get any feedback there. On Simi’s July announcement, there was mention of a couple of places that were across the river, one official free public parking lot and the other at what I believe is a city lot that doesn’t get used on Saturdays and Sundays.

So I opted for the questionable lot, as it was a shorter walk over the river up South First to City Hall, the pre-arranged meet-up spot.

The morning walk was phenomenal, there were over a dozen folks in all, and we covered quite a bit of territory in a little over 3 hours. We even got to witness a right-wing protest march. Quite interesting.

Timing was such that I headed straight for Uncle Billy’s for lunch with Randy’s group after the PhotowalksATX stroll. Parking off Barton Springs is in a garage behind the restaurant, and fortunately validation came with the meal. Free! I’m 2 for 2!

There were quite a few folks from the North Austin Pfotographic Society in attendance and a few new people that I got to meet. I had Uncle Billy’s Smoked Chicken Caesar salad and a huge glass of water. Yummy.

Randy announced that parking at Umlauf was a challenge, so I made my way to the front of the restaurant and got my parking stubb validated and headed up to Umlauf Gardens, which is about a half-mile away.

The main parking lot was indeed full, but as I pulled in two cars were preparing to leave, so I held out for a few minutes and got a good end-spot beneath a huge tree. Plenty of shade and once again, FREE! That made 3 for 3!

I got there way before everyone else, so I had a chance to walk about and get some shots on my own. It was my first visit to the Umlauf Sculpture Garden and Museum and I’d heard so much about the garden that I was super jazzed to finally visit. Really pretty cool.

A large corporate donation makes it possible to have free admission for Summer 2017, but I made a small personal donation before I started walking around.

There were quite a few people enjoying the gardens, plenty of sculptures to see, and there were benches to sit on throughout. It was pretty busy the entire time I waited for the other folks to show, but I was able to get quite a few shots before Randy corralled everyone in one corner of the garden.

Randy gave a passionate talk about reflectivity, tonality, and light with great supporting visuals, and talked about using in-camera tools to achieve contrast, then gave a live demonstration with umbrellas, lights, reflectors, and an honest-to-goodness light meter! It was a great presentation.

It got to be about 2:30 p.m. and after a hot and sticky day in Austin, I’d finally ran out of steam. I headed back to I-35 North and about 40 minutes later I was home.

A shower felt really good and dinner was awesome, but my hour-long nap was the topper.