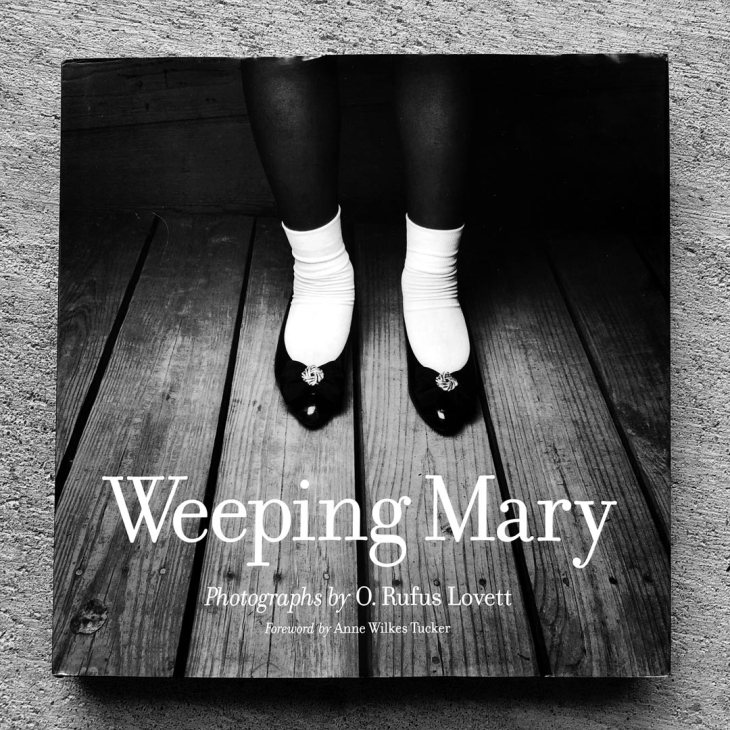 My efforts to learn about and appreciate Lone Star talent have resulted in a new addition to the Texan Photographers section of the Morris Library.

I spotted a black and white “ussie” of Mr. Lovett and Scott C. Campbell in IG Explore – it’s spooky how much Texas-related stuff shows up there – and noticed a comment made by Keith Carter, another legendary Texas discovery.

Side note: I added Carter’s Fifty Years to my library last year.

Anyway, me, being the snoop I am, had to take a peek at Lovett’s stream. Lots of interesting shots, and after a little more internet research I came across high and wide praise for his charming book of photos of a very small town and its residents in East Texas.

I was able to find a first edition of Weeping Mary in excellent condition for a great price. 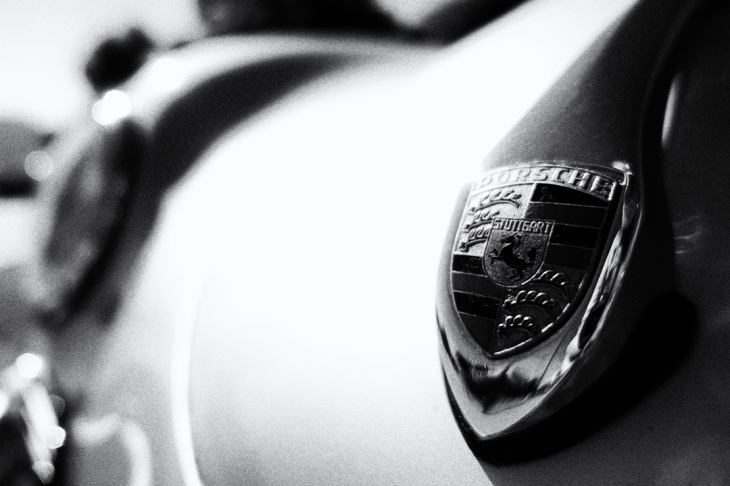 … in the digital darkroom.

I played around with one of my shots from last Sunday’s car show over in Round Rock at Centennial Plaza. This is the badge and right front-end of a silver colored Porsche 1600/356. 1956, I’m guessing.

The original photo was color, taken using the vivid setting available in the Sony RX100M3.

I use an older version of Photoshop, CS5 Extended, or Photoshop 12. I haven’t yet fully embraced Adobe’s subscription model and this rather old version still works on my trusty old 2012 Mac Mini.

I have the free version of the NIK software bundle installed and use it often for both color and black and white edits.

I haven’t yet fully embraced their subscription model…

For this shot, I used the Silver Efex Pro 2/030 Film Noir 1 filter to make the conversion to BNW. Love the grain from this filter. There are plenty of settings to mess with, including film types, vignette, and brightness/contrast. I also removed the image border.

Next I used the Photoshop burn tool to darken up the letter “P” at the top of the badge. I was pretty much shooting into the sun at ƒ/1.8 and a it got a little blown out, but there was enough there to recover.

I like that blown-out area to the left of the badge, framed by the badge and the curve of the fender, with the trees in the background and the fender’s shadow fore.

Back in mid-August I purchased one of the G3 Ondu 6×12 pinhole cameras.

I’d just missed the Kickstarter pre-order deadline, but the good folks at Ondu were kind enough to give the pre-launch price, even though it was my fault for letting the purchase linger in the shopping cart on their site. They actually reached out to me, which was nice.

About 3 days later, another box arrived. It was another 6×12. Not sure how that happened, but I reached out to them via email, telling them that I’d be happy to send it back if they covered shipping. They appreciated my honesty and gave me a mailing address. About a week later I finally got to the local post office and sent the package via mail.

I sent them a note with a picture of the receipt and Jessi at Ondu asked how to reimburse me. So cool.

I was waiting for word from them that the package had arrived, occasionally checking my PayPal account for evidence that it’d reached Slovenia.

Then right around Christmas the box I’d sent came back. For some unknown reason it was returned to me. So weird.

I waited a couple of weeks past the holiday to reach out via email to let them know what had happened, attaching a picture of the travel-worn package. I asked them in my note “I’m not sure what to do about this, folks. Any ideas?” and Elvis replied “… this camera just is meant to be yours. Lets not complicate things more.”

Still deciding what I’ll do with it, keep it or gift it.

This blue-button SX-70 – that’s why it has “SE” as part of the camera’s name, maybe – was purchased at the San Jose Photofair.

Sadly, I no longer have this camera. It started to produce a series of 4 small, fuzzy, and bright yellowish dots vertically just off-center left. Don’t know why or how that began, but I stopped using it altogether about a year after I got it.

I got some great shots with it before its demise, though.

I did a slight variation of Adrian Hanft’s hack

Auto focus was pretty cool. I was able to use a bit of my 600 film stash, too. At the time 600 film was still available and I would snag 5-packs at Costco for around $40 US, as I recall. A good deal.

To use that film in the Sonar OneStep, I did a slight variation of Adrian Hanft’s hack, which involved just removing the ND filter over the photocell and turning the light/dark dial all the way to dark for each shot. It worked well. 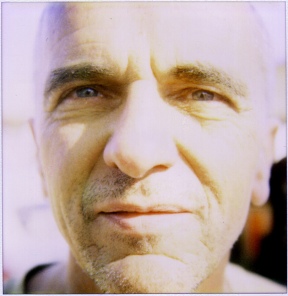 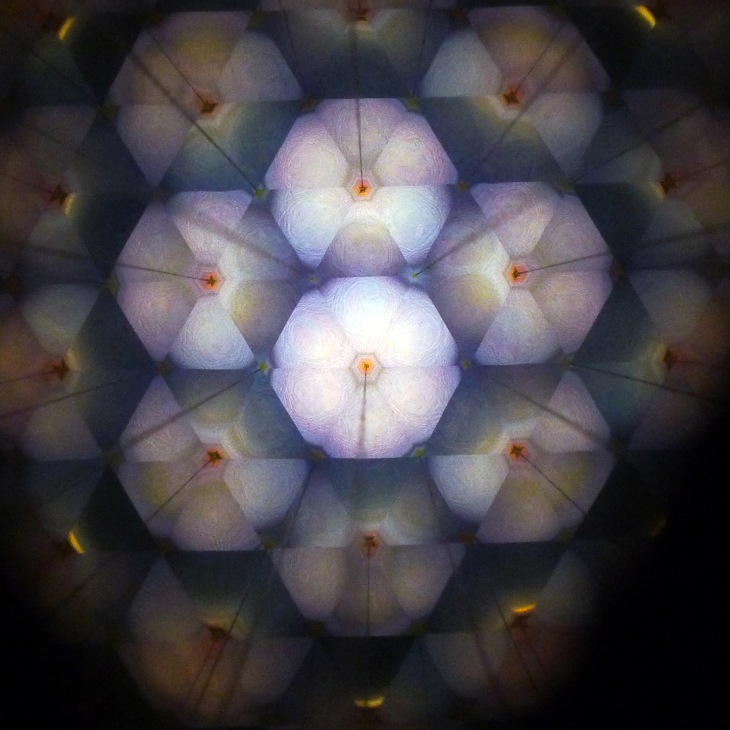 I had one of those days yesterday.

The weather was funky. Grey, foggy, drizzly. I didn’t want to leave the house. At all.

So I played indoors. It’s been a while since I put together the Leica D-Lux 4 and the toy kaleidoscope I keep in my studio.

I fiddled with that cool little combo for hours. Patterns, shapes, color. So much fun.

I attended a talk in the Spring of 1998 put on by the UCSC Extension in Mountain View, CA. The speaker was digital artist David Biedny.

It was part of their Creativity in the Digital Age series. I don’t remember much about the talk in general, but the one thing he said that evening that’s stuck with me all these years was that creativity and play go hand-in-hand. 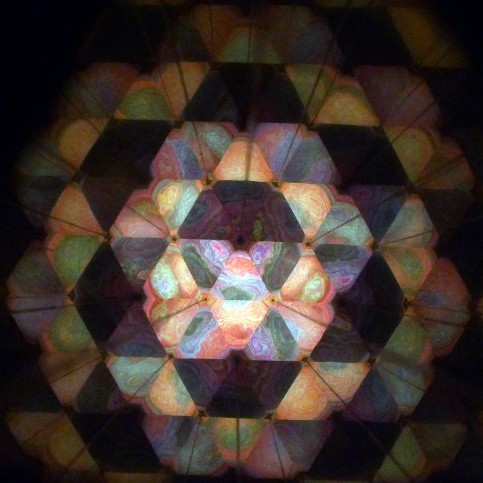 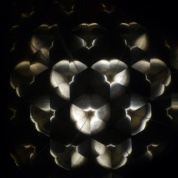 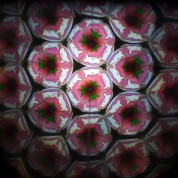 I bought this tiny little shooter for one reason only… its size. Amazingly, it’s the same width and height as a credit card.

What I discovered after it arrived is that it has fantastic image quality and super macro capability.

I haven’t used this ultra-compact camera nearly as much as I should, but in putting this post together I rediscovered a little gem that I’m gonna start carrying around.

Macro Jacks, that is.

A pair of shots, one made with the Olympus E-PL3, an extension tube, and the Lensbaby Composer Pro + Sweet 35, the other made with the Panasonic Lumix DMC-GF1 and the Wanderlust Pinwide.

Cool that I wrote about how I made the Pinwide shot on Flickr. “I found it while I was out back watering the roses. It was corroded and covered in dirt. I cleaned it up a bit with water from the hose and let it dry.”

It was corroded and covered in dirt.

“I took the picture later in the day. The sun was on its way down allowing a sliver of light to peek under our old and slightly uneven garage door. I got the shot by laying on the garage floor with the Pinwide less than an inch away from the jack.”

I love the shadow and contrast, not to mention that gorgeous blurry bokeh at the top and swirl at the bottom of the EPL-3 shot. Pretty cool.

Diggin’ ’round in the dirt has its rewards. Same with the archives!

I know I bought this camera new, but I can’t recall where I got it. I could find no evidence of purchases online at the usual vendors. I may have bought this at a brick and mortar store in Silicon Valley, likely San Jose Camera or Keeble and Schucat.

It’s a fun little 35mm film camera. So compact, it’ll fit in a shirt pocket. And with the ƒ/2.8 lens and high ISO capability, it performs well in all types of light.

The only bother with this camera is that every time the cover is opened/closed the camera resets to default settings and the flash is enabled.

Other than that, it’s a pretty cool little shooter. 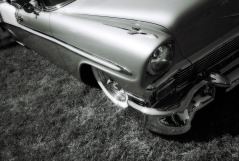